Two years, ten years, and passengers ask the conductor:What place is this? Where are we now? I am the grass.Let me work. – Carl Sandburg

One hundred and fifty five years ago today, brave men fought in and around a small town in Pennsylvania to determine whether the Union would endure or whether it would not.

The Battle of Gettysburg broke the tide of the advance of Robert E. Lee’s Army of Northern Virginia and while the war itself didn’t end for another 22 months, Gettysburg decided the outcome.

Lee’s objective was psychological as much as strategic. By 1863 there was substantial sentiment in the North to allow the Confederacy to go its own way and end what had become an increasingly bloody, unpopular and costly war. By subjecting the North to the same sort of invasion the South had been subjected to – in essence, bringing the war home – Lee hoped to increase this sentiment and force the North to negotiate a settlement.

Gettysburg was very much an accidental battle. Neither side was really looking to fight here, but the armies accidentally collided, largely because Lee was deprived of Jeb Stuart’s cavalry in the early stages of the battle and thus lacked his usual awareness of where the Union forces were. Once the initial impact was made,on July 1st 1863 in a battle between Brigadier General John Buford’s Union cavalry division and two corps of Union infantry and two large Confederate corps that attacked from the north and northwest under General Richard Ewell, the armies came together and the battle was on.

An astounding fact about Gettysburg is that the victorious commander of the Union forces, General George Gordon Meade, had only been in command of the Army of the Potomac for a scant three days, after General Joseph Hooker was relieved of command. Meade was caught by surprise with the sudden collision of the two armies, but he reacted with coolness and unexpected courage at several points when the battle could very well have been lost with a different sort of general in charge.

The missing man at Gettysburg, one who might very well have altered the course of the battle and of history was Confederate General Stonewall Jackson, who was accidentally killed by his own troops after his amazing victory at Chancellorsville.

The key to Gettysburg was the control of the high ground, the hills and ridges outside the town. After Gen. Buford’s troops were scattered into the hills that first day of battle, they could easily have been driven out of the high ground with an assault by the victorious Confederates, and had Stonewall been in command there’s no doubt he would have driven his troops to do exactly that, digging them in on the high ground and reinforcing them with Longstreet’s divisions to wait for General Meade’s Union Army to come at them. Gettysburg would then have been a very different battle. But the troops Jackson would normally have commanded were under the command of General Richard Ewell.

General Ewell, even after he was ordered by Lee to take the Union position on Cemetery Hill “if practicable” chose not to make the attack even though Buford’s men had mostly left. There’s no question that Stonewall Jackson would have ordered his troops to take the high ground and dig in to wait for the main Confederate forces which were coming to the ridges from the west. In that case, it would have been the Union forces attacking uphill at an entrenched Southern army backed up by dug in artillery. The battle could very well have ended quite differently.

When Ewell finally did attack, on the second and third day of the battle, it was the Union forces who were reinforced and dug in and the Confederates who were forced to assault them. Ewell’s hesitancy likely cost the South the battle.

On the second day of the fighting, July 2nd, General Lee sent General Longstreet’s divisions against the Union Left flank in an attempt to roll it up and knock the Union forces off of the high ground. Meade sent reinforcements to the Left flank to shore up positions that later became legendary – the Peach Orchard, the Wheat field, Plum Run Valley and the Devil’s Den. The Union forces held on in spite of horrendous casualties.

One of the most amazing exploits of that day happened in the defense of Little Round Top, where Colonel Joshua Chamberlain, a former college professor in command of the 20th Maine maintained a precarious hold on the Union’s extreme left flank under assault from General John Hood’s troops.When the 20th were almost out of ammunition, Colonel Chamberlain led them in a surprise bayonet charge downhill that swept the Confederates off the hill, saved the position and likely the Union, a deed for which he later won the Medal of Honor. 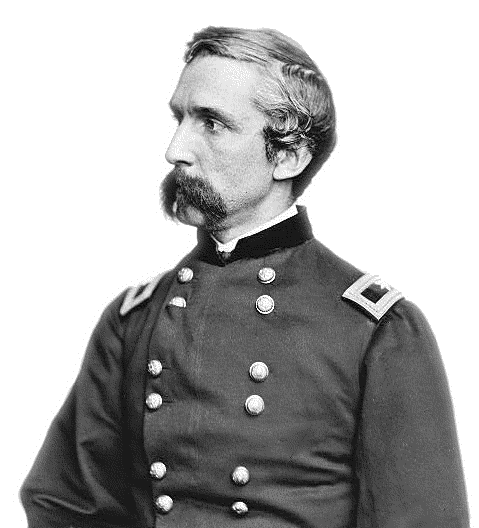 On the third day, July 3rd, Lee decided to risk everything on a frontal assault on the right center on the Union lines, and 12,500 Confederate troops advanced from the ridge line three-quarters of a mile (1,200 meters) towards Cemetery Ridge in that gallant attempt to reverse fortune known to history as Pickett’s Charge.

It was a slaughter. The Union artillery had deliberately held its fire during the Confederate bombardment prior to the Charge, but as the Confederate troops approached they were hit with fierce artillery fire from Union positions on Cemetery Hill and north of Little Round Top, and from the Union center. Nearly one half of the Confederate troops who participated in the Charge failed to return from the attack. Somehow, some way, Confederate General Lewis Armistad’s brigade managed to make it through the withering fire and briefly breach the Union lines at a place called the “Angle”, a place with a low stone fence near a small wooded area. But they were quickly hurled back, and with that, the battle was essentially over. 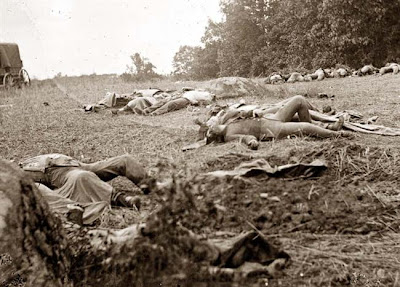 After the battle it rained, something that occurred frequently enough to give rise to a belief among soldiers on both sides that the smoke and gunpowder somehow brought on the weather.

The two armies, both licking their wounds and having been through almost more than men should be able to bear gazed at each other across the field of battle on that long ago July Fourth. On both sides combined, there were over 50,000 casualties from three days of battle.

Late in the evening, Lee began the torturous retreat southwards. Did he understand at that point that the war was lost? Perhaps, since he was recorded as telling his troops “This is all my fault.” We have no way of knowing. But on that July Fourth, one nation’s hopes for independence were doomed and another nation’s hopes reaffirmed.

After the battle, there were huge amounts or corpses that needed to be disposed of, and the Union decided to make the site a national cemetery, for convenience as much as anything else. Four months after the battle, on November 19, the cemetery was dedicated, and a ceremony was held.

The main speaker was a nationally known orator, Edward Everett. In those days of oratory as a national sport, he was expected to deliver a real rip snorter of a speech, and he reportedly did just that.

Oddly enough, Everett’s isn’t the speech that’s remembered.Almost as an afterthought, the organizing committee invited President Abraham Lincoln to participate a scant two weeks before the ceremony, where they requested that he appear and “make a few brief remarks to honor the occasion”.

So after Edward Everett finished his speech, which clocked in at close to an hour, the President rose and delivered those few brief remarks, ones that started with “Four score and seven years ago” and have come down to us through the mists of history.

Gettysburg today is a living version of Sandburg’s poem, in a way. The grass has done its work,but much of the original landscape has been altered and it takes some effort to visualize what happened there. To do that, you have to go there when its quiet and listen to the ghosts. Trust me, they’re there in abundance and they’ll tell you the whole story if you feel like listening.

Best wishes for a wonderful July Fourth…and take a moment to remember and honor the ghosts of July Fourths past. They deserve that much, at least.