Time for the UN to Send the Blue Helmets to America?

The opinions expressed by columnists are their own and do not necessarily represent the views of Townhall.com. 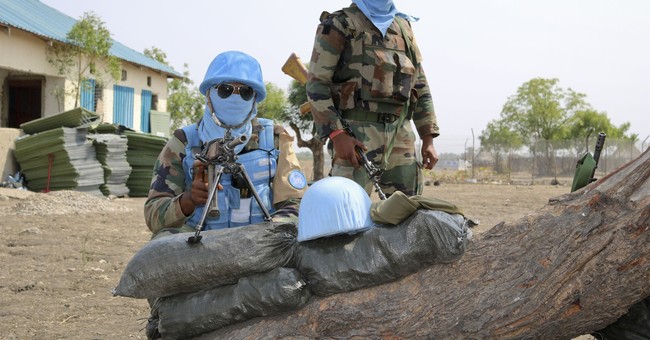 Are Minneapolis, Atlanta, and other American cities about to be put under UN protection, led by UN troops from Ethiopia and Rwanda?

Floyd is asking the HRC (yes, a funny coincidence) to set up a commission of inquiry into “racism and police brutality” in the U.S., specifically “police killings of black people and America and the violence used against peaceful protesters.” The HRC also has the authority to recommend “measures to redress violations, provide justice and reparations to victims, and hold perpetrators to account.”

Under Chapter VII of the United Nations Charter, the UN can deploy troops to prevent “crimes against peace.” And the UN Department of Peace Operations is charged with planning, preparation, management, and direction of such “peaceful interventions.” Thankfully, the UN has at its discretion thousands of well-trained and highly professional troops from Ethiopia, Rwanda, Pakistan, Tanzania, and China. (Well, maybe not so “highly professional,” there is a long list of scandals involving UN peacekeepers and such things as child prostitution, human trafficking, and other serious human rights abuses.)

The current membership of the HRC is like an FBI Most-Wanted List of the worst abusers of human rights in the world. Afghanistan, Angola, Democratic Republic of Congo, Nigeria, Pakistan, Bangladesh, Burkina Faso, Cameroon, Eritrea, Somalia, Togo, Sudan, and Venezuela are among the Council’s 44 members.

Now, I have been to a lot of places most people wouldn’t visit, including Syria, Iraq, Chechnya, and Uzbekistan. Oh, and Venezuela. But the other countries on this list? Angelina Jolie can visit because she has local government approval, a well-armed security force, and an itinerary limited to local orphanages. Me? No thanks, I’d like to live a bit longer, and with all four limbs attached.

Just how bad are things in these countries now sitting in judgement of the United States? Pretty bad. ”Rebels and government troops in Congo have committed atrocities including mass rape, cannibalism and the dismemberment of civilians, according to testimony published on Tuesday by a team of U.N. human rights experts who said the world must pay heed.” The UN report also detailed testimony that “included boys being forced to rape their mothers, little girls being told witchcraft would allow them to catch bullets, and women forced to choose gang-rape or death.” (I am leaving out even more gruesome and horrifying details.)

Let’s take a brief look at some of the other members of the Council. Sudan, where during its “Land Cruiser War” against the non-Arab population in the province of Darfur, hundreds of thousands of civilians were massacred, mass rapes were common, and often child soldiers were sent in to do the killing. Bangladesh, where according to the World Slavery Index, over a million and a half men, women, and children are enslaved. Eritrea, where extra-judicial executions and forced labor are common.

But none of this stops high UN officials from condemning the United States. Referring to Philonise George’s testimony, UN Deputy Secretary-General Amina Mohammed had this to say: “Today, people are saying, loudly and movingly, ‘Enough.’ The United Nations has a duty to respond to the anguish that has been felt by so many for so long.”

Now, a bit about the honorable Deputy Secretary-General, who is from Nigeria. The journal Foreign Policy reports that “environment group claims Amina J. Mohammed authorized illegal exports of endangered rosewood during her term as Nigeria’s environment minister.” In one of her last days in office, Mohammed signed 2992 export certificates for shipment of valuable but endangered rosewood to China, despite a legal ban on exports.

This is par for the course in Nigeria, which is listed at No. 146 out of 180 countries in the Transparency International ranking of corruption. And it is well known China spends a lot of money all across Africa. Oh, and in the northern half of Nigeria, the penalty for homosexuality is death by stoning; in the more liberal southern half, it is a mere 14 years in prison.

Now, it is theoretically possible the UN could send Ethiopian and Rwandan troops in a “police action” to “protect human rights” in America. In reality, such a decision would have to come from the UN Security Council, where the U.S. has a veto.

But that is not going to stop the Human Rights Council from conducting an “investigation” and issuing a “report” denouncing the United States for “severe human rights abuses” and “systemic racism,” perhaps even “genocide.” It is beyond obscene that countries like Democratic Republic of Congo feel entitled to stand in judgement of the United States of America.

Sure, child prostitution, mass rape, modern-day slavery, even cannibalism are A-OK. Instead, it is the U.S. that is in the docket of world opinion because BLM activists and various leftists with their own ax to grind are spreading the lie that racism in America is widespread and systemic, and that “police brutality” is commonplace and condoned by white Americans.

It’s shameful. Maybe we should set up a Go Fund Me page to buy air tickets to Kinshasa and a Bantu phrasebook so some of these jokers can go see life in what they imagine is a better and more just world. (And take bets on how long they last, either before scramming home, or ending up on a local menu.)