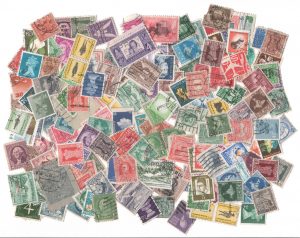 I was ready several hours ago to write this round-up. What delayed me was the automatic Windows 10 update that took over my computer. I can’t complain because my computer is working much faster now than it did before. Also, faced with forced non-blogging time, I used the time wisely to begin photographing my Mom’s effects to give to an appraiser.

I’ve spent the last several hours photographing her stamps, hundreds and hundreds of stamps. My Mom was a packrat rather than a collector. Collectors go for quality rather than quantity, they know what they’re collecting, and they catalog and organize them. Packrats just save, rather compulsively.

Despite the lack of order, there are a few interesting twists to my Mom’s packrat collection. She started collecting stamps in the 1920s, so they cover a pretty vast time span. Also, both she and her parents were extremely cosmopolitan. They traveled all over the world as did their friends, and all of them wrote prodigiously.

I’m only a third of the way through the review and I’ve found stamps from 1914 through the early 21st century, including stamps from now defunct nations such as Palestine, Czechoslovakia, and Nazi Germany. I’ve also got stamps covering that same time period from Lebanon, Syria, Egypt, Greece, Turkey, Switzerland, Austria, England, Holland, and the United States.

I doubt any of the stamps are very valuable — the mere fact that I have so many duplicates and that they were sent from literate countries to literate countries — argues against their rarity or uniqueness. Still, it’s been fascinating to look through them.

The post Going through my Mom’s stamp collection appeared first on Watcher of Weasels.