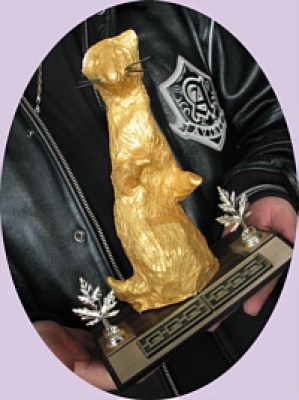 Yes, once again, It’s time to present this week’s statuette of shame, The Golden Weasel!!

Every Tuesday, the Council nominates some of the slimiest, most despicable characters in public life for some deed of evil, cowardice or corruption they’ve performed. Then we vote to single out one particular Weasel for special mention, to whom we award the statuette of shame, our special, 100% plastic Golden Weasel. This week’s nominees were all slimy and despicable, but the votes are in and we have our winner by a nose…the envelope please…

JoshuaPundit : I rarely pay attention to Hollywood or what passes for celebrities there, but it’s finally come out that Charlie Sheen is HIV positive and has been for quite some time. While I sympathize with anyone who has this illness, Sheen apparently hid it from the world for quite some time, even paying millions to blackmailers. And he also hid it from a number of his sexual partners.

Lawsuits will of course ensue, but how much money can ever compensate for someone infecting you with HIV and potentially taking your life and the lives of others whom never made the choice to have sex with Charlie Sheen, never even met him? How much would you settle for?

It was a truly despicable, weasel choice he made, simply to protect his own vanity and image. It’s the antithesis of anything remotely resembling manhood.

Actors frequently get recognition for their talents, and they also get awards. The only thing I want to add to what was written above is this. You, Mr. Sheen can accept this award as recognition for your finest performance ever in your role impersonating a man and a concerned, decent human being.

I hope somehow you come to terms with the damage your vanity caused to others, make true repentance and find peace.

Check back next Tuesday to see who next week’s nominees for Weasel of the Week are!

Make sure to tune in every Monday for the Watcher’s Forum, and remember, every Wednesday, the Council has its weekly contest with the members nominating two posts each, one written by themselves and one written by someone from outside the group for consideration by the whole Council. The votes are cast by the Council, and the results are posted on Friday morning.

It’s a weekly magazine of some of the best stuff written in the blogosphere, and you won’t want to miss it…or any of the other fantabulous Watcher’s Council content.

Our Weasel Of The Week!