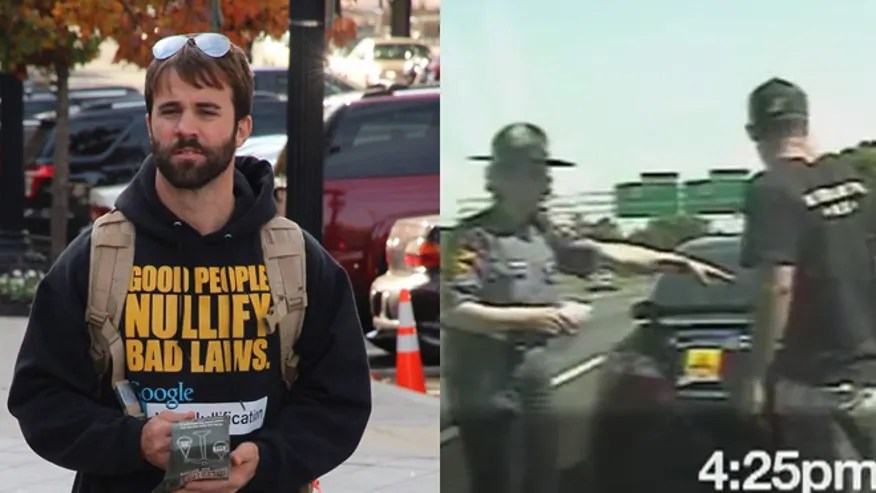 I was talking with Nathan Cox, a friend and a neighbor, this morning and he said Fox News had contacted him about a story they read on this blog. (Read that story here.)

The short of it:

Nathan Cox was pulled over by State Trooper Melanie McKenney for not displaying a front license plate on his vehicle. He received a $75 ticket and was detained for 28 minutes as McKenney tried to force Cox to put his camera inside the car. She claimed she was afraid he could use it as a weapon.

And from the information Cox received via a Freedom of Information Act request, the Trooper was concerned about being videoed. In a radio transmission, she said  “I don’t want myself on any Youtube or whatever”. So I suspect her demands that Cox put the camera in the car and her attempts to grab it from him were more out of fear of Youtube exposure than blunt objects.

McKenney’s justification was, as she put it:

“It took him a long time to pull over so I just wanted him to get out of the car,” she tells a colleague. “I don’t want to search his car — I don’t want anything like that but I don’t (know)– if he’s got a gun …”

“It took him almost a mile before his vehicle pulled over and, of course, we’re always looking for things that may be unusual because you never know what you’re going to get during a traffic stop,” McKenney told FoxNews.com Monday.

When you are traveling at 70 MPH on I-295 – that means you are covering a mile in less than 52 seconds.When the Trooper pulled in behind him on her dash cam video (which is here) the time counter on the video is at 20 seconds. And as you can see in the video, when she pulled behind him to pull him over, they were approaching an on ramp. Cox cleared the on ramp and then pulled over on the shoulder. The time on the video when he was on the shoulder was :55. Which is a total of 35 seconds. Even if he were going 70 the entire time the most he would have traveled is 1/2 mile. It is clear to see Cox was being cautious. And from the time she pulled directly behind him until the car came to a complete stop was 56 seconds.

I would have stopped in the same place.

I understand that cops have a tough job. But this cop set an aggressive tone from the beginning. And in my opinion she was unnecessarily confrontational.

She pulled his door open, something I have never seen. She could have – and for her own safety should have – approached the window slowly and ordered him out of the car from there. If she were truly concerned for her safety the last thing she should have done is pull open the door – not knowing if the person had a gun pointed at her – and sticking her head and torso in the vehicle was simply beyond dangerous.

No, what she expected was not a weapon, but drugs in my opinion. She was hoping to make a drug bust. She put herself partly in the vehicle, obviously confident she would not be harmed.

And we all know that what Cox was doing was not hiding something as the Trooper speculated, but turning on his cell camera. That should have been obvious to the Trooper when she saw the camera.

Most people would have simply complied with the Troopers commands without question and without regard to the legality and constitutionality of those commands. Nathan Cox is not one of those people. And his prior run in with the police that the cops in the video discuss ended with Cox receiving a check for $10,000.00.

But Trooper McKenney filing a $1.35 million lawsuit, that is absolutely ridiculous. This is nothing more than the collision of egos. And nothing good will come out of McKenney keeping this story in the public eye.

And here is the dash cam video: