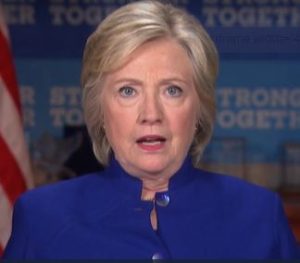 Do you remember how 2004 presidential hopeful Howard Dean, whom the drive-by media aggressively promoted as a sane and normal Progressive presidential candidate, destroyed his candidacy in an instant with the infamous “Dean scream”? That little soprano shriek at the end of a maddened litany of states he intended to win on the road to the White House established in people’s minds that he was both unstable and weak:

I wonder if Hillary didn’t just have her Dean scream moment. Speaking to a crowd in Orlando, Hillary angrily insisted that, in her America, people will be forced to join unions whether they want to or not. Her affect while speaking is abnormal. Bobbing her head over her rigidly held body, and with her eyes periodically bulging out, Hillary talks in a strident, hectoring monotone, punctuated by an angry hypothetical question: “Well, having said all this, ‘Why aren’t I 50 points ahead,’ you might ask.”